The Ridgewood Choral Scholarship Fund was instituted by the Choral in 1967, and five years later, B. Franklin Reinauer endowed the fund as a memorial to his wife, Florence. The current award to the winner is $2,500. Since its inception, over $42,000 has been awarded to encourage talented young musicians.

Please consider making a tax-deductible donation to the Florence Reinauer Memorial Fund to ensure that young musicians will have the support they need to continue their musical studies. Donations are often made in the memory of a deceased loved one, to celebrate a joyous occasion, or even to honor a special event. To print the donation form, please click on this link: Memorial Fund Donation Form.

The Marjorie Vandervoort Vocal Award in the amount of $1,200 was instituted during the 90th Anniversary Season (2017-2018) in honor of Marjorie Vandervoort’s 25 years of service as our Music Director. This award is intended solely for excellence in vocal performance.

The Marjorie Vandervoort Vocal Award, is – as its name implies – only for vocalists, in contrast to the Florence Reinauer Memorial Music Award which the Choral has been giving for 51 years for either an instrumentalist or a vocalist. The Board has been aware for some time that in that competition vocalists are often at a disadvantage due to the fact that teenage vocalists have immature instruments, whereas instrumentalists have most often been taking lessons since early childhood. For this reason, and because we are a choral group, we thought it time to recognize the amazing talent of the vocalists who audition for the Florence Reinauer Award but do not win that award. In naming the award, we thought to honor our beloved director of 26 years, Marjorie Vandervoort. Just as Ms. Vandervoort continues to inspire us with the love of music, we hope that the Marjorie Vandervoort Vocal Award inspires young singers to pursue their passion for performing for many years to come.

Donations to this fund are welcomed and are tax deductible. To make a donation to the Marjorie Vandervoort Award, please go to the Donations page, or simply click on this link: Annual Fund Donation Form.

Acknowledgements of donations to either Award will be sent, and both the donor and honoree will be listed in the latest spring concert program. The Ridgewood Choral thanks you in advance for your support of our Awards, and the young and talented musicians they support. 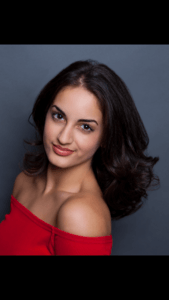 Ms. Cardona, a senior at Wayne Valley High School was selected for the New Jersey All State Chorus and the North Jersey Regional All Women’s Choir. She has performed lead roles in musicals at Wayne Valley High School, including Into the Woods, and Romeo and Juliet.  At NJPAC she starred as Maria in a production of West Side Story and had the role of Beth in Little Women at the Manhattan School of Music Summer Music Conservatory Program in 2018. She also performed in Godspell We Beseech Thee and School House Rock at the YMCA theater in Wayne.  At Our Lady of Consolation Roman Catholic Church in Wayne, NJ she serves as Cantor.  She has studied voice with Laquita Mitchell for 7 years. 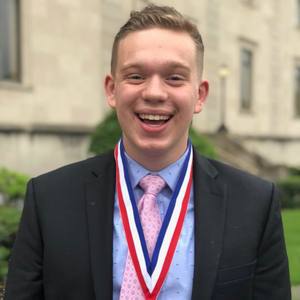 Mr. Bucci attends Mahwah High School, singing in a chamber ensemble under the direction of Mrs. Lynn Morneweck-Fuld as well as becoming a member of the MEBCI All Bergen County Chorus. While in High School, Joseph was part of the NJMEA All State Choir ranking 1st Tenor One in the State of New Jersey. In concordance with NJMEA, he holds a Governors’ Award in Arts Education with a concentration in Vocal Music. With the NJHSA Genesis Chorale he completed a National and European tour. Joe has participated in many benefit concerts in the surrounding area. Last year, he performed in Night of Future Broadway Stars to raise money for Covenant House, a charity that aids homeless youth around the United States. Joe is currently studying with Principal Artist Richard Bernstein of the Metropolitan Opera.

Many thanks to the Judges for the 2019 auditions:

Laura Carnibucci, composer – woodwind instrumentalist, has frequently collaborated with Ridgewood Choral for many years as both composer and accompanist . As a composer, she has received many varied commissions and has enjoyed critical acclaim for her compositions which span the repertoire from solo piano, vocal, chamber and choral music, to concertos and full orchestral works. As an accomplished instrumentalist, Ms. Carnibucci is trained in piano, flute, bassoon and oboe. She holds degrees from Stetson University and the San Francisco Conservatory of Music and has studied with flutists Geoffrey Gilbert and Jean-Pierre Rampal. She has appeared with orchestras in the United States and Europe as soloist and chamber ensemble member.

David Maiullo, pianist/accompanist/coach, is head of the BRAVO Alliance of Performing Artists, the musical director of the Chamber Virtuosi Orchestra and the Music Director of the Church of the Most Blessed Sacrament in Franklin Lakes. He has performed over 2500 recitals and programs which have taken him to stages worldwide. For  eight seasons, he was Chorus Master for the New Jersey State Opera and continues to lecture and play for operalogs and concerts with the Company.  He holds positions on the faculty of Nyack College, where he is director of the Opera Workshop, New Jersey City University, and is the coach/accompanist of the Musical Theater Class at the Juilliard School of Music.

Craig Ketter, concert piano soloist/educator, received his Bachelor’s and Master’s Degrees from the Eastman School of Music under the tutelage of Nelita True and Barry Snyder.  He continued post-graduate studies with Yoheved Kaplinsky of the Juilliard School. Complementing his performing as soloist and as collaborative musician with symphony orchestras throughout the United States and abroad, Mr. Ketter has presented master classes in the United States and Argentina, and has served as a guest professor and adjudicator in several institutions.  He has been a faculty member of the Rocky Ridge Music Festival in Colorado and acted as Chair of the Piano Faculty at the American Festival for the Arts in Houston, Texas. Residing in Fair Lawn with his wife, Canadian soprano Valerie Gonzalez, and two sons,  he is currently on the faculty of  New Jersey City University.

Lil and Len Rubin, of Maywood, (center and right) are shown presenting the $1000 award they endowed to Andrei Foca-Rodi, of Fort Lee, formerly of Hackensack. The presentation was made at the Richard Lane Memorial Composition Award Concert On October 14, 2006, hosted by The Ridgewood Choral, of which Lil Rubin is a long-standing member. In addition to music composed or arranged by Richard Lane, former accompanist of the Choral who died in 2004,  the piano compositions of three finalists were performed at this concert, including Musical Moments, the selected  winning piece by Mr. Foca-Rodi, a student at New Jersey City University.

Richard Lane, an internationally recognized composer and accompanist for the Ridgewood Choral for over 35 years, wrote a wealth of music for instrument and voice. His talents were given to the Choral in the many choral/vocal pieces he wrote or arranged expressly for this women’s chorus. The Ridgewood Choral premiered “A Spring Bouquet,” written for us to celebrate our 75th anniversary, in 2003. And, in honor of the 90th Anniversary, the Ridgewood Choral will again perform “A Spring Bouquet” at its 90th Annual Spring Concert. Richard Lane was a teacher of piano and music composition, and a graduate of the Eastman School of Music. He was a member of ASCAP and Music Educators Association.